Pop singers and songwriters in Taiwan can -- either -- crudely parrot empty patterns of pulp content, melodic lines, and lyrics as predictable as the smell of durian by day and stinky tofu in the night market -- or -- they can use their fame and fortune for something more deep and lasting. Aren't you tired of performing the endless iterations of "I'm such a cute and possibly hot babe!" or "I'm so cool a dude that you'll swoon!"? Turn away from such boring blather and instead fill your songs with lyrics from poems and languages of the rich history and cultural heritage of your island nation.

You can take good poetic lines of, for example, the three Chinese-derived languages of Taiwan -- Mandarin, Taiwanese, or Hakka verses -- and combine them with Austronesian choruses to make beautiful music. In so doing all the languages are given honor and a renewed interest can be kindled in those that are being lost. And with that combination don't forget to marinate with the rhythms and music of these other cultures.

There is another island nation half way across the world where you find such richness in pop music. Consider an exquisite song of the world-famous recording artist - Sting. It is entitled, "Christmas at Sea."

The verses are adapted from an English poem of the great Scottish writer Robert Louis Stevenson
The chorus comes from a traditional Scots Gaelic song. (Scots Gaelic is a language under threat of being lost as more and more of the younger generation learn English in the schools in Scotland. See any parallels here in Taiwan?)

The themes of English verse and Scots Gaelic chorus ring convergent: in the lines of the verses, Stevenson's expresses the longing of a seaman to be home on Christmas day; in the chorus, the traditional Scots Gaelic song leads with "Thograinn thograinn bhith dol dhachaidh" "I wish I were going home."

Sting and Mary Macmaster composed the music to fuse these expressions in two beautiful languages of the one great theme of human longing.

Many who listen to this song will then go on to read more of Robert Louis Stevenson, and respect Scots Gaelic as a precious gem.

Taiwanese artists could do the same.
But it takes an educated artist. And it is ironic that in Taiwan where parents place such a high value on education, the educated artist is scarce. He or she may know the latest fashion trend of clothes, makeup and hair, but do even a few in this younger generation really know much about their own history and cultural heritage?

The artist must take the time to learn about his own cultural history, folk songs, and writers of the past -- and also, learn to respect those of another culture and language in Taiwan -- for he most certainly has learned very little of this in Taiwan's schools.

Of Taiwan's recording artists, who will rise above the infantile drivel out there? Fighting against pragmatism will win through to lasting depth of beauty.

Download it from iTunes. Listen to it some more.
Does it not make you long to know more about the sailing culture and economics of Britain in the past? British poets? More Scots Gaelic songs?

All day we fought the tide between the North Head and the South
All day we hauled the frozen sheets to 'scape the storm's wet mouth
All day as cold as charity, in bitter pain and dread,
For very life and nature we tacked from head to head.


We gave the South a wider berth, for there the tide-race roared;
But every tack we made we brought the North Head close aboard:

We saw the cliffs and houses, and the breakers running high,
And the coastguard in his garden, his glass against his eye.

The frost was on the village roofs as white as ocean foam;
The good red firse were burning bright in every 'longshore home;
The windows sparkled clear, and the chimneys volleyed out;
And I vowed we sniffed the victuals as the vessel went about.

The bells upon the church were rung with a mighty jovial cheer;
For it's just that I should tell you how (of all days in the year)
This day of our adversity was blessed Christmas morn,
And the house above the coastguard's was the house were I was born.

And well I knew the talk they had, the talk that was of me,
Of the shadow on the household and the son that went to sea;
And O the wicked fool I seemed, in every kind of way,
To be here and hauling frozen ropes on blessed Christmas Day.

Poem by Robert Louis Stevenson, Music by Sting and Mary Macmaster
Scots Gaelic.  The traditional Scottish song 'Thograinn Thograinn' is a women's working-song from the Isle of Skye.
Posted by Aì Tâi-oân at 10:33 AM

All is not lost. There is an anti-establishment rap group,
拷秋勤 (Kou Chou Ching), has an interesting mix of Minnan, Hakka, Mandarin and Austronesian elements in their music.

Link to their Myspace:
http://www.myspace.com/koucc

kungwan kind of beat me to it, but here's a link to Kou Chou Ching's tune 黑心肝 which is in Hakka (客家話), Hoklo (河洛語), Mandarin (華語), and English:
http://www.youtube.com/watch?v=lnhf9tS291o

I saw them perform at the December 20, 2009 rally in Taichung to protest the Ma Ying-jeou government's unsupervised dealings with the Chinese Communist Party and the visit to Taiwan by Chen Yunlin. Here's a video clip I made of part of that performance. 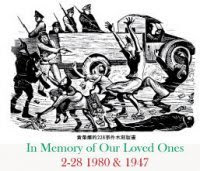